Book review: Nobody Owns the Moon 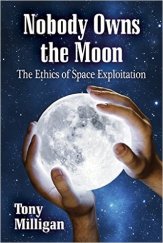 (Review for the Astrobiology Society of Britain.)

Is the exploration of space justified by our natural wanderlust? Are we morally obliged to terraform other planets in order to avert stagnation or extinction on Earth? Should we worry about the socio-economic consequences of asteroid mining, or the aesthetic damage done by the extraction of Helium-3 from the moon?

Such questions have vexed sci-fi writers and space scientists for decades, but the apparent imminence of a new space age powered by private enterprise has given them fresh urgency. Tony Milligan, an ethicist at King’s College, London, is one of the many philosophers and social scientists who have recently begun to think seriously about “space ethics”. In Nobody Owns the Moon (196 pp., McFarland), he writes for a lay audience about the issues involved. In twelve short chapters (with titles like Mining Off-World and Generation Ships), he succeeds both in introducing the key debates of this novel field and in demonstrating a distinctive, humanistic way of advancing them.

Advocates of expansionist, extractive human activity in space typically appeal to supposedly over-riding imperatives, be they to maximise the number of human beings in the universe, to spread life as far as possible, or something else. But, quite apart from the difficulty of justifying these maxims, this reductive way of thinking threatens to turn us into Hollywood villains, sacrificing what makes us human for the so-called greater good. What we need instead, Milligan argues, is an ethic that preserves what we most value in humanity even as we make the profound transition to a new mode of civilization. This means admitting that our problems will not be solved by simple formulas but with the aid of the many concepts that figure in normal ethical deliberation: humility, courage, gratitude, loyalty, beauty, identity, community, and so on. If this approach often ends in moral perplexity, then so be it—better genuine perplexity than the false confidence inspired by oversimplification.

Nobody Owns the Moon is even-handed and rigorous in its consideration of the various viewpoints at issue, drawing on a wide range of contemporary and historical sources, and effectively undermining prevalent assumptions. In some places the argument is a little too opaque—particularly in chapter four (which I gave up on). But for the most part, Milligan’s book is challenging in just the right way: it forces us to think hard about the moral character of our species and its relationship to the universe we live in.

View all posts by Sean